The task of Pilot Peter Bartter and his crew on Halifax BB378 was to drop an agent (Flemming B. Muus) near Gyldenløves Høj and then continue to a drop zone near Kattrup Gods and drop 9 containers on Operation Table Jam 19.

The count on Kattrup Andreas Peter Bernstorff-Mylius was in 1943  contacted by the S.O.E.-organisation on Zealand and agreed that his fields could be used for air drops. The first planned reception was Table Jam 19.
The reception committee consisted of a local worker Franz Christian Dalskov, a chauffeur who worked for the count, and a team of people from Copenhagen. The latter group came in a taxi to the area near Kattrup shortly before the operation was scheduled.
One of the members of the team from Copenhagen was former art dealer and translator Georg Brockhoff Quistgaard, who along with his wife Ellen had attended several other receptions of weapons.
The couple had in Jutland attended receptions in Randers, Hvidsten and Aalborg in 1943, and they also participated at the first airdrops on Zealand near Gyldenløves Høj in August 1943.
The reception committee on the night on December 12th 1943 had to go home empty-handed. Halifax BB378 was attacked by a nightfighter and never reached the fields by Kattrup Gods.
Franz Christian Dalskov continued his resistance work i the following years, but was arrested by the Germans on February 16th 1945 in connection with his participation in other airdrops. He was then placed in the camp in Frøslevlejren in Denmark where he stayed until the liberation.
Georg Brockhoff Quistgaard was arrested by the germans January 13rd 1944 after a heavy gunfight at his home in Copenhagen and was put in the Vestre Prison. His wife Ellen was not at home and managed to evade to Sweden.
Georg Brockhoff Quistgaard was March 2nd 1944 together with eight other prisoners sent to a German jail in Schwerin, before he April 25th was brought back to Denmark and Vestre Prison.
Brockhoff Quistgaard stood before a German court May 12th 1944 along with eleven other danish resistance fighters.
The Germans had in December 1943  taken two danish S.O.E. agents Jacob Jensen and Kaj Ronald Lund. They unfortunately revealed so much about their work, that eight of the twelve, including Georg Brockhoff Quistgaard, admitted everything.
Together with two other men and Monica Wichfeld, George Brockhoff Quistgaard was sentenced to death in the trial.
On May 20th or 21st Georg Brockhoff  Quistgaard was executed in Ryvangen along with the two other convicted men. Monica Wichfeld had her death penalty converted to life imprisonment, but she died but later in German custody.
At Gyldenløves Høj and near the dropzone of Table Jam 18 George Brockhoff Quistgaards name is engraved with three other names in a memorial stone.
The stone was erected after the liberation to honor four resistance workers who all were working as reception commitee members at Gyldenløves Høj in 1943-1944 but either were killed by the germans during the occupation or died in concentraions camps. 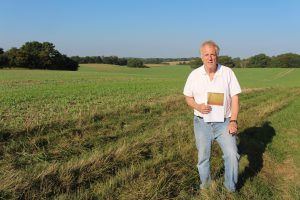 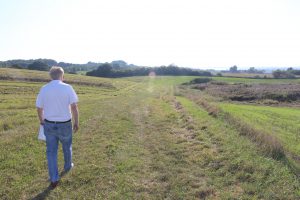